It’s been an up and down journey for our sitting room.

sitting room before we moved in

When we first moved in we essentially lived in this room alone. It was a bit drab but it had heating and the kitchen at the time was on this floor and accessed from this room.

Then we had to move out for the plumbing and re-wiring to take place.

And then of course the ceiling collapsed which we have only recently had fixed. Plus we had to give the fireplace some serious attention.

And now we have finally got to a point where we can give it a lick of paint. Ultimately I think we’ll wallpaper this room, but we wanted to give it a quick fix. So we bought some Dukes Blue by Crown Period Paint and this is how it’s looking now. 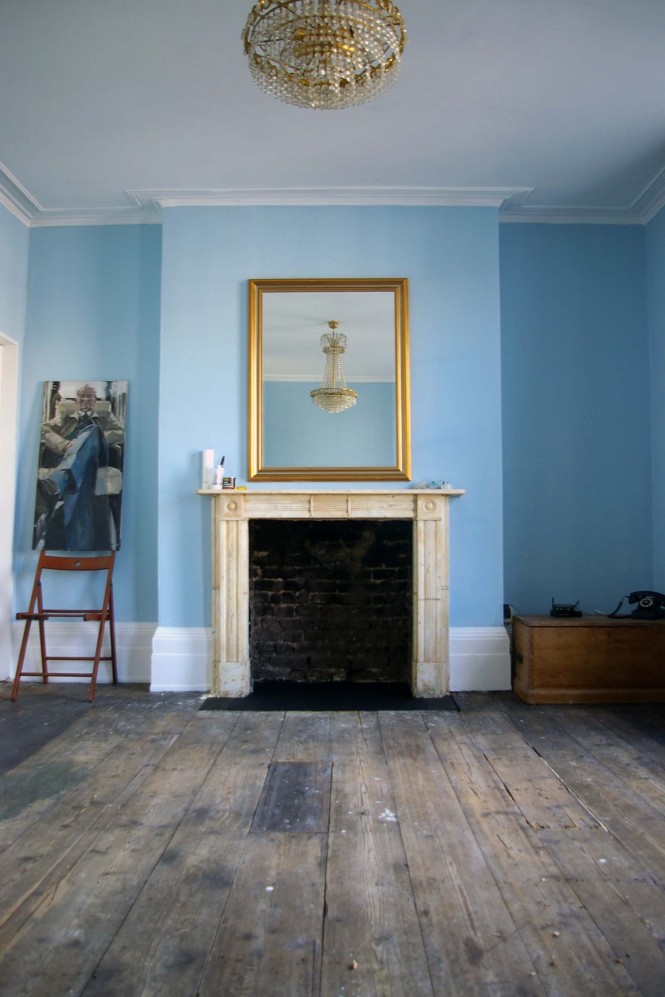 You’ll notice it’s not exactly finished. Despite the potentially nice floorboards we’ve decided to carpet this room and have chosen a very neutral colour which we’ll have rugs on top of. We just want one room at least that is a bit cosy.

You can see how this room used to have a large rug in the centre with stained boards round the outside. We’re going for a kind of modern version of that arrangement.

To ready the room for this Klaus has made a new hearth area. We now need to buy a new grate and get the chimney swept. The carpet is on order and after the sad demise of our old sofa we have also ordered a new sofa bed.

I also can’t stand these dull curtains, they came with the house. They are actually pretty odd as they come in a total of seven sections. Presumably there’s some logic to this but I can’t work it out.

But curtains are so expensive that like the others in the house we’ll just have to live with them for now. Plus if we are going to wallpaper we’ll have to think clearly about what we’ll replace them with.

There’s not exactly enough furniture for this room but adding all the extra bits we’ll now need is fun enough and something we can take our time over. But this time next week it will be a fully functioning room again, which if we wanted to we could just leave.

One thought on “Sitting room back in action”